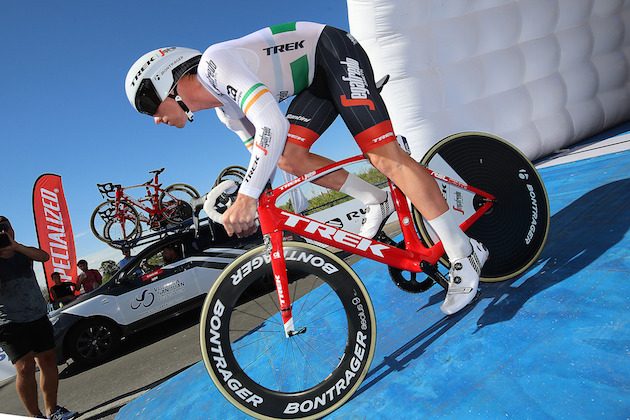 Ryan Mullen’s first international victory in individual time trial at the 3rd stage of the Vuelta a San Juan 2017 was especially heart warming for the manner in which he targeted and managed himself during the event.

Alan Heary worked with Ryan on focus and mental toughness and there was plenty of evidence of both in his 25 second win over Italian world pursuit champion Filippo Ganna in the third stage time trial at the Vuelta a San Juan in Argentina.

Ryan pretty much blitzed the opposition to take a first win with his new Trek-Segafredo team and his comments afterwards suggested that he has certainly been making the most of the concepts Mullen and Heary have worked on in the past.

“When I saw this course a few weeks ago I was actually really happy with it,” he said of the fundamentally flat 14.5km route.

“This distance and this type of terrain is really good for me. I’m a pretty heavy rider and I don’t really go up hills very fast. So when I saw this was flat I was happy.”

This plays in to one of the key messages to clients of Going in the Zone: Goal setting. Athletes, business people, students – It doesn’t matter what your sphere of activity; identifying and clearly stating an attainable goal is a very big step on the road to success.

For Ryan, there was an understanding long before he got on the plane to South America that the first opportunity to shine with his new World Tour outfit was going to come in the first week of the season.

Another element in the complicated process of winning an international cycle race is to identify the obstacles Ryan is likely to face in achieving his goal and what actions he needed to do to overcome them.

Some people assume that mental toughness is all about the power of positive words and imagery and to an extent that’s true. Part of it, however, is facing up to the understanding that there will be roadblocks encountered on the path way to success and that the successful anticipation of those will help smooth the way through them.

This can mean obstacles encountered long before the event and, of course, on the big day. Pacing proved challenging for Ryan in Argentina but he was prepared and therefore mentally tough enough to meet the challenge.

“I misjudged the pacing a little bit: I went out a bit too hard and then the last four kilometres, it was a pretty hard headwind, and I came off the pace a little bit there.

“I really suffered in the heat as well for the last four or five minutes, so it was more a case of just hanging on and keeping a little bit of rhythm and not lose too much time. Luckily I held on!

“I was watching my power meter and thinking this sucks, I feel like shit. But everyone’s power was down in the heat.”

So Ryan’s work on focus, visualisation, confidence, controlling nervousness and how to get mentally ready for the event using routines and bringing it all together with imagery paid off. It was a first international win for the 23-year-old Irish Time Trial and Road Race Champion.

In the end, it came down to being able to answer the key questions: What’s your goal? Why? What are the obstacles and what actions can we do to overcome them?

The Mp3 imagery programme recorded by Alan Heary and used by many professional riders including Ryan prior to Time Trials, is available below.